Samurai 7 tells the story of a village named Kanna. Every year during the harvest a group of bandits come and steal away almost all of the rice that had been harvested that year. Not only that, the bandits are becoming more demanding, now taking women and children in addition to rice.

After finding several samurai and having a few encounters with the local government the villagers return to Kanna to prepare defenses against the bandits. The story is more than about a small village because, after successfully defeating the bandits, the samurai then launch an attack upon the capital to defeat a power-hungry ruler who has recently risen to power as Emperor. 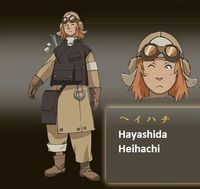 Hayashida Heihachi is a genial samurai who wishes to avoid fighting as much as possible and prefers to eat rice instead. During the Great War, he took a position as a combat engineer, which kept him off the front lines but also used his mechanical skills. He is discovered chopping wood in exchange for food or devices that interest him. Read more

Retrieved from "https://samurai-7.fandom.com/wiki/Samurai_7_Wiki?oldid=4159"
Community content is available under CC-BY-SA unless otherwise noted.